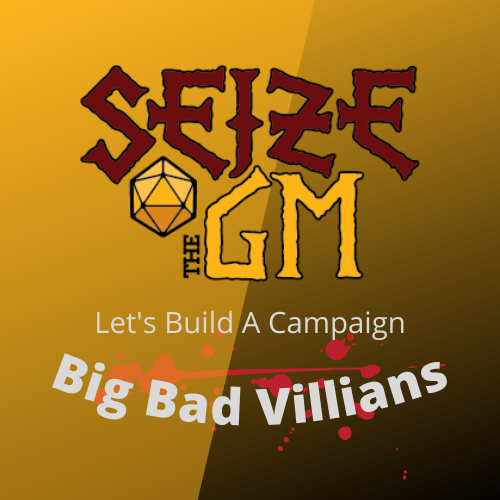 Ok so something that almost every campaign will have is a big bad villain. It is a staple of storytelling. From myth to contemporary storytelling you will have a villain. You may not always know who it is from the start. I had one of my characters be revealed as the villain at the end of the first story arc. The villain may also be the antagonist, or just whatever is behind the forces working at odds to the party. Once you decide who you want to use then you need to figure out how they can be made into that villain you need them to be.

A few things of importance to keep in mind as you work on your villain remember a few things.

One is they are the hero of their story and also that a sympathetic villain is more powerful in the story. This is a fine line to walk – a villain with understandable goals makes for an engaging story – a villain that the players like better makes for an anti-campaign. Also make the players find out how the villain became the way he/she/they/it is.

Villains have more impact if they are relatable, believable and also human. Even if they aren’t your players are, and they will have a hard time relating to something that is truly alien. So even if the bad guy is an unknowable alien from the gas giant planet in the galaxy of Delvandia, it still needs to have something human like that the characters can understand. An antagonist goes a long way, but never underestimate the power of a pure moustache twirling villain for the right genre.

The Crypto Neural Network of Centauri

As the planetary governing body of the planet known in Sol as Proxima B detected the incoming ship it was almost too late. As the ship slowed to a crawl as the DarkDrive went offline the government decided that it was time to give the beings of Sol a chance to meet some of their galactic neighbors. While the crew was still in Cryosleep for the punch the Cybersynacy Government had figured out how the people of Sol worked on several levels. They knew that mankind was a barbaric race that had been evolved to have a most adaptive neural network in their bodies.

See the people of Proxima B had wrecked their planet generations ago and this lucky happenstance made it so the Proxia,  as they are called, had a vessel to upload into. Yes they had figured out how to digitize their minds. The computers in the ship were rudimentary at best so once the command crew had been overwritten by the Proxia the computers of the ship had to start being updated and made to interface with the Dark Drive. As more help was needed then more people from the Elpis were rewritten after they had been digitized. The people of Proxima needed help but they were not monsters.

It took a number of years to get the ship systems working properly and there was a bit of trial and error. After they got the engines and systems communicating effectively It was time to get the primary uplink running. While all of this was happening the Proxians were able to create a new recording stack that was able to meld the minds of the two. At the same time it was creating the first digitized humans.

They needed to go to their new home so they could help humans to be a better version of themselves. They would help by riding along and curbing or out right stopping the worst behaviours of humans. The new race would be better than either of the parent races. The few new mends that did exist were having ideas of ways to work on fixing the mother planet and helping the few species that had shone signs of higher level intelligence. The process that humans called Uplifting and the Proxians called Raising.  Unknown to the originals that had undergone this process there was no survival of both; only one would finish the trip back to Earth.

When a hero describes residents of Alternate universes, they always describe their antagonists incorrectly. Evil versions of the heroes, sporting pointed goatees, laughing maniacally about their evil plans.  It’s the hero’s cognitive dissonance.  They think they’re fighting an evil version of themselves.  And that’s not exactly right.  .

Ruminating on the “what if” and “if only.”  Watching your infinite future condensed to a single line, wondering about the now severed branches.  Two identical versions, going through the same logic process, and arriving at different conclusions.  One giving into a violent impulse, the other refraining at the last minute.  Different decisions, different outcomes and consequences. Dark consequences of the road not taken. Still, at the root of it all, they are the same person.  They’re not the hero’s inverse, but their jungian shadow.

We are all supposed to be the heroes of our own stories.  So what does it mean if are you are also the villain?  There are no secrets, no lies, and no easy explanation.  The horror that comes with seeing the depths of depravity one could (and has) sunk to.  The fallout is catastrophic.

Denial of truth, of facts, and ultimately the denial of the self.  The hero sees their dark reflection in its raw form. They see their capacity for evil, a capacity they most likely suppressed to the point of nonexistence (or denial). The hero can destroy themselves completely and utterly.

But all is not lost.

If one has the inner strength to stare at the truth and not flinch, to fully acknowledge their own shadow, then defeat is not a foregone conclusion.

The insight to know how you would act in their place, the tactics, their biases are all laid bare.  You know how they’ll think, how they’ll act, what they prioritize.  It is possible to manipulate the confrontation to your advantage.  And the hero knows the consequences if they fail, because they know what they would do if they were in the same position.

Seemingly innocuous, the Jhukarga sigil has become more and more of an influence . . . or at least it is more and more of an obvious part of the day in and day out ornamentation of life.  At first, the slightly off kilter and asymmetric design seemed like nothing more than another fad spreading amongst the youth – an image and a meme with which to annoy the elders.  That was a decade past.

Jhukarga has proven to be a powerful part of what can bind people together.  Each and every cell, gang, or coven of Jhukarga remains a tight knit community helping themselves against any who are not yet inculcated to the knowledge and power professed to be held within the eye of Jhukarga; harnessed by the tattoo subtle shaping what the person projects to others.  The commonplace addition of the tattoo, and the layout of the various safehouses has given rise and worry to many. Well, to the many who watch for the unhappy rumblings of the civil society to leak into a more polite conversation.

Slowly growing at odds with the Mass Bibliotecha Militum, the Jhukarga groups have become noticeably more vocal in the last year.  There are protests and demonstrations, a very loud addition to the surrounding space. When you are on a spaceship or space station, that proximity becomes alarming.  The Jhukargahave shown, almost by accident, the growing number of skilled members of their groups – the engineers, the stevedores, the soldiers, and the slicers have all found a sense of community.  Community that has now provided a purpose.

The Polis has to deal with the Jhukarga more and more frequently stepping up to encourage saving, joining, or otherwise rescuing the Arkship.  It is the way to find a better place, a better life, as our leaders here have failed us.  The image continues.  It replicates.  You see it happening over and over again.

You see it on a panel of the Arkship beamed back for news. The same as has been spread for the last decade within the Polis.  The same.

Col. MacKenzie Fargo of the Mass Bibliotecha Militum saw that. He bought in. The Colonel took over.  He listens to them now.  And Col. Fargo will stop your meddlesome interference.

How to Use Jhukarga in Game:

Another unsolved mystery, the Jhukarga provides a way to introduce a more fantastical component of the world – be it truly inhuman aliens, shapeshifters, nanotech, or other means of coopting influence or a powerful way to show the likelihood of human resistance to overbearing authority.

Definition: government in accordance with a system of law

Zendead – Hope for TTRPG’s Ok So a fun bunch of folks talking about tons of RPG stuff and doing a bunch of Promoting folks on twitter and starting to do some charity stuff. Again a bunch of really nice folks.

You pick the way.

Joules – Robot Carnival.  This blast from the past 80s anime.  8 stories, 8 animation studios, one theme.  Think four rooms or animatrix, but with a robot theme.  There’s no “punk” tied to it directly.  Steampunk, Space Laser battle, dystopian future, old school war propaganda?  They’re all there.

Guard-a-Manger – Wanted.  While the comic books it is based on are also well received, there is an ease and insouciance about the 2008 movie that bears that inspiration. James MacAvoy in a role where he keeps his hair becomes part of something greater that inspires him but then also makes him question what is good or heroic.  And it has some rip roaring stylized action sequences that are perfect for summer.

Liked it? Take a second to support Zendead on Patreon!